Women in Football: Are Female Footballers More Susceptible To Injury?

Football as a sport for women is continuing to gain momentum and becoming an ever-increasing first choice of sport for young girls.

In fact, FIFA reports that 12% of the footballing population is female, which equates to approximately 30 million players. Numbers grew by 50% between 2000 and 2006 alone.

The first women’s World Cup was held in 1991 and since 1994 women’s football has been a part of the Olympic Games. The 2015 Women’s World Cup held in Canada was the first to have 24 teams, eight more than the previous World Cup. In terms of player numbers, Australia ranks fifth in the world for both total registered female footballers and female youth footballers behind USA, Germany, Canada and Sweden. In male football Australia’s numbers are not in the top 10.

Although men and women both play football under the same rules with the same skill sets required, injury trends are starting to develop which highlight the difference between male and female footballers.  Generally female footballers experience a significantly lower number of injuries per playing/training hours compared to male counterparts. However, one big difference is that female footballers are sustaining a large amount of knee injuries.

Studies report that women are four times more likely to injure their knee than men. The most significant knee injury that women sustain is a rupture of the anterior cruciate ligament (ACL). This is a serious injury that requires surgery and a rehabilitation period of around 12 months to recover. Studies report women are up to ten times more likely to rupture their ACL than men. Female footballers also suffer from irritation around the knee cap (patella), however this injury is less debilitating.

There are many factors that predispose women to knee injuries, however no definitive cause. Some of the factors include:

Some of these factors are uncontrollable however limb alignment and muscle activation/control are two factors that we have some control over. But what does this actually mean?

Women have a wider hips than men which means the leg’s angle into the knee is wider. This puts the knees at a disadvantage and in a position that leaves the knees vulnerable. Women are also generally weaker in their gluteal (bottom) muscles and hamstrings. More specifically the gluteus medius muscle which is a stabiliser of the hip and prevents the knee falling inwards during running and landing is often under-developed in female athletes.

Recent research by Holly Silvers at the University of Santa Monica has also found that men and women jump and land differently, mainly due to muscle activation patterns. To simplify it men tend use both their quadriceps and gluteus muscles when then jump and land, whereas women are very quadriceps dominant, putting a lot more force through their knees.

How can we change this?

Through biomechanical assessment of running, jumping and squatting techniques we are able to identify areas of weakness and develop strategies to improve them. This can be done quite simply by one of the Physiotherapists at Jubilee. Once assessed, a series of exercises can be prescribed to better prepare the body for the physical demands of the game.

More importantly, the implementation of a warm-up that adequately prepares a female player for not only an improved performance on the pitch but also reduces the inherent risk of injury. Developed and studied by the FIFA Medical Assessment and Research Centre (F-MARC), the FIFA 11+ injury prevention program has been proven in multiple research studies worldwide to significantly reduce injuries and enhance performance. 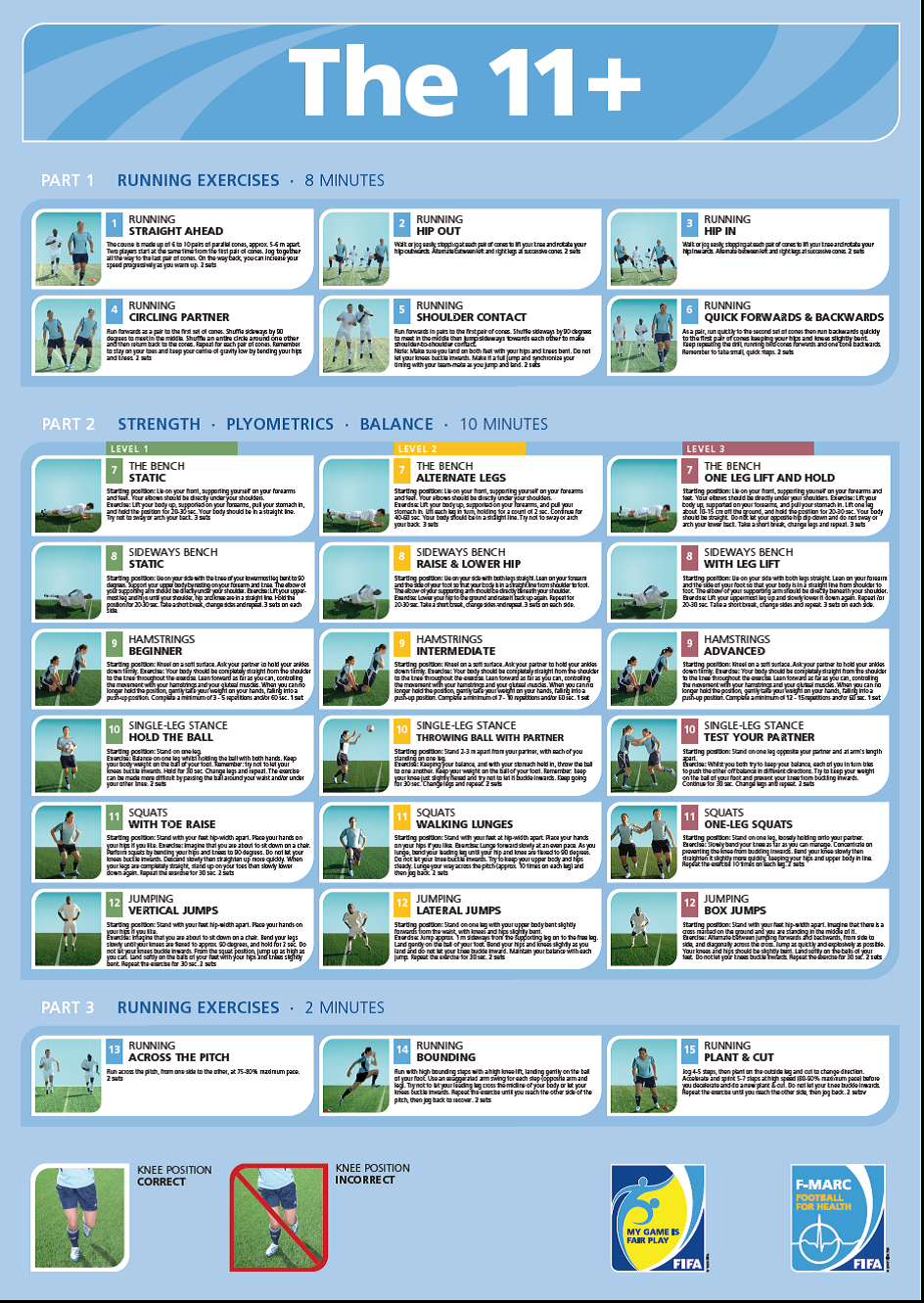 The FIFA 11+ warm-up has been shown to substantially reduce major injuries, particularly in females between the ages of 13-18, by 50% and a reduction of 39% of overall injury incidence in recreational/sub-elite football.

The program is only effective when the warm-up exercises are performed regularly, at least twice a week. Compliance is of utmost importance—injury risk is lowest in those players with higher adherence to the program.

For more information regarding management of female footballers’ injuries or prevention of these injuries contact one of the Physiotherapists at Jubilee Sports Physiotherapy.