Figon – Doing It For The Kids 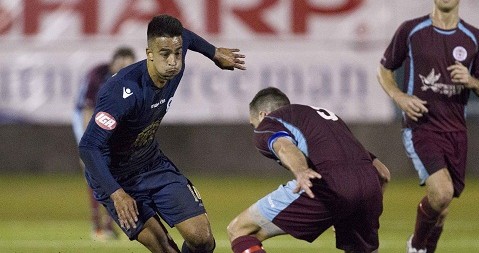 A goal for St. George FC in his first grade debut at just 16 years of age; selected to the Sydney FC National Youth League team a year later; a spate of serious injuries – including two full knee reconstructions – that at times left him seriously wondering as to whether he would ever play at an elite level again.

Heading into the business end of this season, 20-year-old Figon has been a revelation for the Sharks, both on and off the field, in his first full comeback season for the team where his representative career began as a Sutherland junior in the Under 11s way back in 2004.

Primarily coming off the bench for the Sharks in 2014, Figon has single-handedly turned games in his side’s favour on a number of occasions, but it’s the work that he does with the next generation of junior Sharks that he credits much of his recent success to.

As an integral member of the Sharks ‘Skills Acquisition Program’ (SAP) coaching staff, under the guidance of highly respected former NSL great George Souris, Figon firmly believes that ‘without the support of the kids’ he may have struggled mentally to come back from a second knee reconstruction.

“When I did my knee for the second time as a 19-year-old I really did think that my career was over, because having been through it all before I knew exactly what the injury was,” explains Figon.

“To be completely honest I have to thank the kids for getting me through that period, they really do look up to you and you want to get back out on the field and play again for Sutherland or even in the A-League so they can come and watch.

“When the SAP kids come down to see me play for Sutherland I really do love it, you can hear them calling out your name and cheering you on which is fantastic.”

With his first grade and SAP commitments taking up most of his time, Figon has  managed to keep his family life in check by having his father Jerry come on board as a SAP team manager for the Sharks.

“Just like me, Dad loves being a part of the junior development too. He was an Australian representative and was apparently quite good back in his day. He was always on my heels to put in the training even when I didn’t want to – so I doubt I’d be where I am today without him.”

As for the future though, Figon is just ‘taking it one day at a time’.

“Right now I’m enjoying what I’m doing playing for the Sharks and coaching the SAP kids. I always knew I wanted to be involved somehow in teaching kids, and let’s face it, I’m probably better off teaching them football skills rather than maths,” claims Figon with a smile.