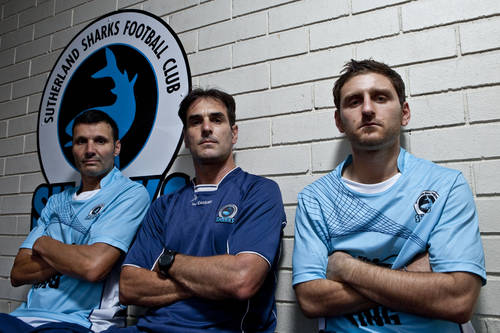 The Team: Sutherland Sharks will again be looking to reach finals football this season after a much improved 2011 season. The Sharks’ ability to mix it with the best in the League was questioned following 2010, though Robbie Stanton’s men proved the club possesses much talent, only just missing out on a grand-final appearance following a narrow defeat to Blacktown City FC.

With the likes of Pani Nikas and Nick Stavroulakis pulling the strings out of midfield, along with the solid experience of George Souris in defence with the youthful exuberance of Hayden Morton, the Sharks do appear complete.

Blake Powell’s return to the club, with the signing of Salameh up front, will certainly provide the Shire-based side with further outlets to find goals this season.

At Seymour Shaw once more, visitors will find it a real battle to pick up points with the Sharks supporters creating a fine atmosphere for their chargers at the picturesque playing venue.

The Coach: Robbie Stanton is another fine example of the quality of young coaches on show in the NSW Premier League. Stanton’s experience at the club has him in a good position this season to lead the side to finals football and beyond, with his experienced heads on the field to assist with the young guns being fed through.

Stanton saw his side fall agonisingly close to reaching finals football in 2011, though the re-enforcements made to his playing roster certainly appear to be on the right track to improve on the last campaign.

A direct style of play with a fine understanding amongst his chargers, the Sharks could certainly be one of the title contenders this season.

Player to watch: Pani Nikas has been a standout for the Sharks in recent seasons with his creative genius and goal scoring ability. An attacking midfielder who leaves his mark every time he takes the field, Nikas’ goals and assists have proven vital for the club.

Nikas has been assisted greatly with the likes of Nick Stavroulakis and Todd Halloran playing around him, and with the addition of Blake Powell and Hussein Salameh, the Sharks forward forays may well prove too hot to handle for opposing defences this season.

Rising Star: Hayden Morton was an exceptional finding for Robbie Stanton last season with the young central defender showing his worth playing alongside George Souris.

Morton was somehow overlooked for International duties, though the youngster continued to work on his game to cap off a great season. A confidence on the ball when bringing the ball out of defence, mixed with quick pace, strong marking skills and fine aerial ability, Morton is without a doubt one of the best defenders in the competition.

Morton was a stand-out in the Central Coast Mariners’ youth team for 2011-2012 and no doubt will be up there for one of the stars of the future this season.