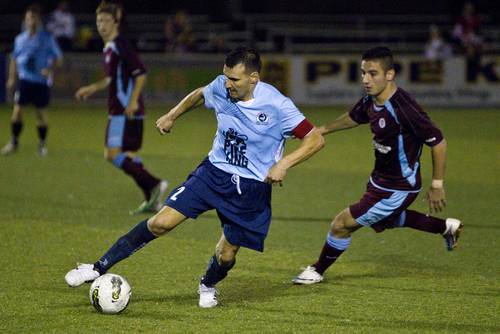 George Souris has nothing to prove in Australian football having twice won the old NSL title with Wollongong Wolves yet at an age when most players have turned to the coaching ranks he still leads the Sutherland Sharks with aplomb so what motivates him to keep going year after year?

George Souris has nothing to prove in Australian football having twice won the old NSL title with Wollongong Wolves yet at an age when most players have turned to the coaching ranks he still leads the Sutherland Sharks with aplomb so what motivates him to keep going year after year?

“I still love playing the game, it’s still a buzz for me and the dressing room banter is something you cannot describe but when I’m in there before the game I still get the butterflies in my stomach and I believe that shows I have the fire in belly still.”

When asked about the bitterly cold winter nights, the teeming rain and gusting winds when things are maybe not going so well on the pitch do thoughts of hanging up the boots ever creep into the mind?

“No, no, never. I think if I ever do start to think like that I reckon it will start to show in my game and when that happens I’ll know it’s time.

“As I’ve said to the club and Stanno (Sharks coach and former Wollongong team mate Robbie Stanton), If I feel I am not performing, letting the team or the club down as well as him I won’t need anyone to tell me, I’ll tap myself on the shoulder and leave.”

Souris’ fitness has seen plenty of debate over the years as he still remains about the fittest player at the club so is it natural or is there a mystic force at work?

“I suppose some of it is natural but also my work helps as I carry boxes of wine up stairs and down long driveways etc. so it is very physical and I’m sure that’s why people get me to deliver it so they don’t have to carry it themselves.

“I also do a lot of work at home by myself which no-one really sees, it’s something I’ve always done and I enjoy exercise and like I say I’ve still got that fire so it’s not hard to motivate myself to do it because I’m doing something I love with a tremendous passion, playing football.”

Thoughts turn to a career away from playing and the old master states: “I would like to think I have some sort of future with the club here in some capacity, I don’t know at what level but that is something for the future and we will decide when the time is right.

“I have my ‘C’ Coaching licence and the way they are heading these days is a lot is done by computer and I have to say I am not very savvy when it comes to that so I might struggle, (he laughs), but further than that I am not too sure what will happen although I do have an Academy that I run and I am very happy doing that.”

However, that is all in the distant future as ‘Souro’ still wants to play next year, when he turns 83-years of age, but says: “I would like to play next year if I am still performing and can give the team something but that is a call for the club and Stanno so we’ll see how it goes.

“For now I just want to concentrate on my football, the Academy and enjoy what I’m doing.”

As a model professional in every sense of the word and can certainly show the players of tomorrow the right way to start their careers.