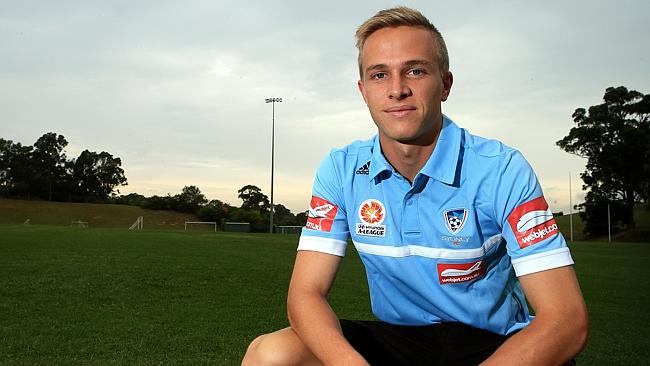 Dylan Caton has found himself in an ideal situation, in the midst of tough times for Sydney FC.

While the club is in the middle of dealing with well-documented internal strife — along with an inconsistent season — coach Frank Farina has given young gun Caton his opportunity to make his way up from the youth side to the first team.

Not a bad opportunity for 18-year-old Caton, who has only just finished his high school education.

“It’s been awesome, especially starting in the Youth League and working my way up,” Caton said.

“It’s happened pretty quickly but it’s been really exciting playing and training with the players.”

Caton made his debut in last month’s derby against Western Sydney Wanderers when he came on as substitute for Alessandro Del Piero.

“It was unbelievable seeing his number come up on the board, but coming on for him meant there was a bit of pressure as well,” Caton said.

“He spoke to me before the game, which gave me a bit of confidence to play.

“He told me to keep it simple and to just play my game and to keep doing what I’ve been doing because that was the reason I was given the chance to play.”

Caton also finds himself in the unusual situation for a footballer of deciding on a second career path, with the young player looking into part-time university studies.

“I’m thinking of going to UTS to do a Business degree, but my main priority is with Sydney and to stay on here and keep doing as best I can, but at the same time you need to have a fallback.”

“He’s been very consistent with the youth team and one of our most consistent and standout players this season and obviously Frank wanted to give him a chance,” Corica said.

“I think he’s come a long way in one year from Sutherland under-20s to first grade at Sydney FC, he’s had a very good season.”

Caton may have been a touch more surprised in terms of the chance that has arrived, not thinking his transition to first grade would happen as quickly as it did.

However, he is grateful for the opportunity to shine.

“I just wanted to do as well as I could for youth this year and start in as many games as I could for them, but then I was given this chance, it’s come along really quickly, but it’s been an awesome experience,” Caton said.