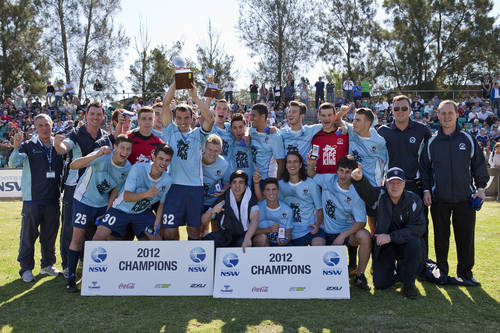 The top two teams in the competition were facing off for the right to be crowned NSW Premier League Grade 20 Champions, but sadly nerves seemed to get the better of both sides as neither were able to display the exciting brand of football that got them this far.

After 90 mostly scrappy minutes, Sutherland Sharks came away with the Championship, completing the Double. A lucky goal for Toufic Alameddine and a well guided header from Patrick Savor was enough to give the Sharks the win over Manly United, whose goal was scored by William Pritchard.

The Premiers Sutherland Sharks qualified by beating Manly United in the Grand Final Qualifier a fortnight ago, that match going into extra time. This match never threatened the same drama though, despite the quality players on show.

The match started slowly as both sides felt their way into the match with only speculative efforts from Dominic Ferguson and Savor to note inside the first 15′ minutes.

In keeping with the match’s scrappy start, it was a fortunate ricochet that gave Sutherland Sharks a 23′ minute opener. A Manly United clearance cannoned into Alameddine, the ball looping goalwards and over Tonu Liiband to give Sutherland the lead.

Neither Liiband nor Marko Bozic were greatly tested, save for a free kick from Nathan Simm that forced Bozic to demonstrate safe hands under pressure.

There was precious little goalmouth action until the very final minute of the half, when Manly United scored a precious equaliser.

A ball in from the left was flicked on by Jack Green into the path of William Pritchard who showed his deftness and eye for goal, touching the ball past Bozic.

It was a beautifully sunny day at Bonnyrigg Sports Centre, the weather befitting of the NSW Premier League’s showpiece occasion and with the pitch in resplendent condition, inexperience was the only real excuse for the paucity of quality in the final third.

Nicholas Olsen showed some attacking intent in the opening minute of the second half, jinking past three Manly United defenders before finding Patrick Savor with an intricate reverse pass, unfortunately for Sutherland Sharks Savor was offside.

Manly United’s top scorer Michael McGinley had had a quiet match thus far, but he popped up in the area in the 55′ minute, lashing a volley well over the bar. He really should have hit the target and it was a valuable opportunity in a match where chances were scarce.

Sutherland Sharks were beginning to exert some authority and they began to control the match in the centre of the park, not allowing Manly United the time or space to create any chances of note.

A searching pass from Savor found Christopher Naumoff on the right hand side, but the youngster lacked composure as he lobbed the ball well over the ball. The Grade 20 Player of the Year had struggled to have any decisive impact on the match.

Sutherland Sharks were continuing to build pressure and it paid off in the 61′ minute when Savor gave them a match-winning lead.

It was a goal of intricate construction as the Sutherland captain Jacob Bandur sent in a dipping cross from the left that was headed back across goal by Todd Halloran. Savor was composed, heading in at the front post, showing good awareness to keep the ball from ballooning over the bar.

It was the goal that the second half needed, as it prompted Manly United to take a more proactive approach to the match, but they were halted by giving away some cheap free kicks a little too often.

Case in point was in the 68′ minute, when Jamie Craig was booked for his troubles. Naumoff sent the resulting free kick narrowly over, but Liiband had it covered.

Manly coach Nigel Mahoney sent on Michael Willis and Max Bogunovic in an attempt to shake up the game.

His side looked like they’d equalised in the 88′ minute when Willis headed in a free kick at the back post, but the linesman’s flag was raised for offside, ruling the “goal” out.

Despite a few desperate late set pieces, Sutherland defended well under late pressure and were able to come away with a Championship win to go with their Premiership triumph.

“They played some good football and got the rewards for their efforts.

“I thought the game today was a bit scrappy but that can happen in finals, but I also thought we controlled a lot of the game and in the end we just about deserved the win,” he added.

McMIllan’s other half of the coaching partnership, Rod Eames, echoed his sentiments.

“I thought today was what you’d expect from a final,” he said.

“We weren’t great first half but I thought we controlled the game in the second.

“It was a good result for us and I think overall we deserved it, both on the balance of play and the season overall.

“I’d like to congratulate Manly United, they pushed us all the way.

“I want to give credit to our boys for a great season – hopefully some of them will get picked up by A-League youth teams,” he added.