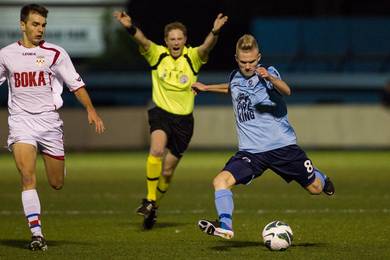 Nicholas Olsen is eager to make up for lost time after returning to his old stomping ground with the Sutherland Sharks.

The 18-year-old speedster was a regular in the Sharks line-up last year helping them reach the finals series and was a talent that was spotted during the course of the year.

But after being snapped up by Hyundai A-League side Western Sydney Wanderers youth team he was unable to play in the finals.

Since then Olsen went on to play the entire National Youth League competition with the Wanderers earning himself a two-year first team contract.

“It was a great experience and probably one I will never forget,” Olsen said.

“I went there starting off with the youth team and after a month or so Poppa (Tony Popovic) brought me into the first team for training which I continued doing for a long time.

“I had a really good season with the youth team, Poppa liked what he saw so I signed my first professional contract there.

Despite signing the contract Olsen was eager for action and decided to severe his ties with the Hyundai A-League club to return to the Sutherland Sharks for the National Premier League NSW Men’s 1 competition.

He made his first appearance back for the club off the bench in their 3-0 win over St George last weekend and looked like he had never left.

“I know a lot of the boys from last year so it is kind of like a second home to me, I know everyone here and am used to how we play.

“I sort of thought I needed to get game time again into me so I thought it was best if I came back and got into the groove again of playing a game and hopefully prove myself again to go back.

“My aim is to become a better player than what I am already and gain a bit more experience, fitness and my football knowledge in general.”

“After departing the Sharks with a premiership in their sights, Olsen admits he has unfinished business.

Along with Premiership success, he hopes he can realise his dream of one day becoming a professional footballer.

“There are always ambitions but at the moment I am focusing on improving myself here and wherever it takes off from here,” he said.

“I really hope I do go on to bigger things but I am here now, this is a club I love playing with and I am sure they will help me along with my journey.”