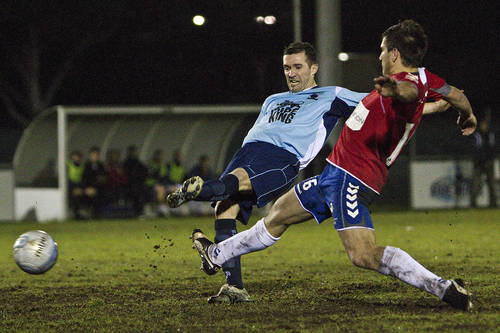 Sutherland Sharks Mat Bailey has made his name by making the late runs from midfield into the box to finish off the sweeping moves the Sharks are noted for and also for his strong displays in the middle of the park.

“I really enjoy the role I’m asked to play and definitely feel it’s my best position throughout the course of my career.

“It’s certainly where I’ve been the most prolific and most used to and I suppose where I feel more at home.”

Bailey has great engines enabling him to get up and down the pitch rapidly and for the full 90-minutes and having played with the Wolves in 2008 and then primarily with Bulli in the Illawarra Premier League before joining Sutherland in 2011, the system played gives the midfielder the freedom to bomb forward and either set-up or finish attacks.

“The system we play under Robbie (Stanton) is very conducive in allowing me the opportunity to get forward, the passing game is terrific.

“This has been the primary reason I have been able to get up front and on the end of the crosses and obviously last year was a good one for scoring and hopefully I can get somewhere near that again this season.

“If I can get close or better my goals figure from last year I will be happy of course.”

Injuries to key players and suspensions have taken their toll on the teams overall performance to date in this campaign and has affected results.

“Yes, you are quite right in that they have played their part but that cannot be used as an excuse as all teams suffer that at some stage during the season.

“It has impacted on the side but the brand of football we are trying to play will definitely prove successful in the long haul so we believe as a team and a group that we are a big chance of making the Top Five and hopefully something beyond so that is what we are looking for.

“We see finishing in the Top Five as a minimum requirement and that is the first aim each year but finishing as high up the league is a given of course.”

Bailey felt the disappointment of being on the losing side in the semi-finals last season and that still rankles.

“Sutherland last year was a group that had the potential I think to go on and we fell at the final hurdle losing to Sydney United in the semis although I believe we had the group to win that game.

“We lost the potential to go on the following week and play in the Final although I believe we still have the players to go one step further this season and then that little further by lifting the trophy.”

Through to the Quarter-Finals of the Waratah Cup, they meet Blacktown City at Seymour Shaw Park on June 6th,  is another competition they are taking seriously.

“It is something we want to pursue of course and with the depth of personnel and playing staff we have here there is no reason why we cannot go well in the tournament, obviously our opponents will have something to say about that but the team morale is good, there’s a good mix and we’ll be going for it.”

As a Superannuation Client Manager for a large corporation, Bailey knows his numbers well so perhaps he has figured out the formula for Sharks success this season but the old cliché of ‘only time will tell’ holds true and for the record, he is another Manchester United fan.