Special Feature: The man behind the machine; Stavroulakis searching for more glory 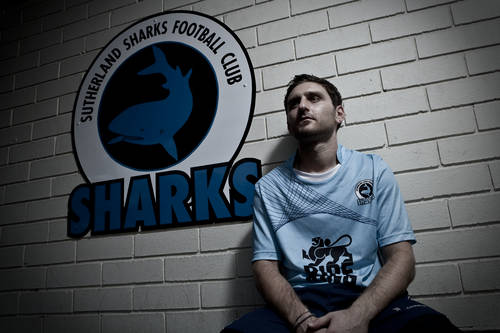 He is the engine room in the Sutherland Sharks midfield and Nick Stavroulakis has become a talisman in the NSW Premier League.

Stavroulakis, 27, has had a taste of football in Europe and a return to Australia was in no way the end of his professional ambitions.

The tenacious midfielder was raised through the NSW youth representative system, but it was during a tour of Italy with the Australian Institute of Sport (AIS) that a then 18-year-old received his first big break at Serie B club Empoli FC.

“Myself and Frank Lagana got spotted in a tournament then got invited to stay another week and we secured a contract in May 2003,” Stavroulakis recalled.

It was a time when the norm for young Australian footballers was to either secure a contract in the NSL or immediately look for a contract overseas.

So after Stavroulakis recovered from the shock of playing professional football in Tuscany, he turned his focus to gaining a more permanent role at the club. There was certainly motivation to succeed with Udinese forward Antonio Di Natale and Socceroo midfielder Vince Grella plying their trade in Empoli’s first team at the time.

“We used to play against the first team every Thursday and to play and train against players like that is something that not many players get to do.

“Italy is a bit different, it was demanding in the sense that everything had to be perfect.

“You had to stand up otherwise you would be off the park.”

Stavroulakis learned about the volatile player management nature that year. He represented himself to get the contract at Empoli but hired an unlicensed agent who looked to secure a deal with fellow Serie B side Hellas Verona. The opportunity to play first team football at Verona was alluring to the youngster but after the deal fell through, the door was all but shut at Empoli.

The midfielder returned to Australia in 2004 during the country’s transition phase. After a short stint with Wollongong, the quest for full time football resumed as Stavroulakis earned a trial with English League Two side Peterborough.

The East of England looked to be a suitable home for Stavroulakis and he was in good company with fellow Aussies Pedj Bojic and Nicky Rizzo playing at neighbouring clubs.

Although it was in the lower leagues, Stavroulakis gained valuable experience in gritty football.

“There were games left, right and centre, so you had to adjust quickly because over there it’s do or die,” he said.”

“You don’t have margin for error when it comes to performing, they didn’t care whether you were coming from the other side of the world as long as you could do the business week in week out.”

But fate plagued Stavroulakis’ ambitions once more as turmoil at Peterborough led him back home.

Although his time in England was prematurely cut, Stavroulakis returned just a year into the A-League. That was enough motivation for him and Sutherland was happy to add his name to their player roster. In his first three years back in the NSW Premier League, Stavroulakis definitely made an impact. But 2009 was a breakthrough year when he received a call from Frank Farina at the Roar.

“Mass Murdocca got injured for 6-8 weeks and they were looking for a certain mould of player so I went there for two weeks.

“(Frank Farina) liked what he saw, he was giving me great feedback.

“He said ‘if something happens, we’ll look at bringing you in for the next pre season’.”

But timing – yet again – wasn’t on his side. With Farina leaving the club shortly after the trial, Stavroulakis was booted back to the NSW Premier League. It wasn’t all bad news, though, as Sutherland completed the 2009 season with the prestigious Waratah Cup and the championship. Although the A-League dream is still very much a focus for Stavroulakis, he is enjoying watching the state league grow in stature.

“It looks like it’s going to be a tough competition this year, because a lot of the teams are really competitive,” the 27-year-old said.

“That’s a good thing for the league and the neutrals that watch.

“As a player you want it like that, although I still don’t think there is enough respect for the league.

“But if you look at the teams there is a lot of talent, especially with young blokes coming through the clubs.”

Stavroulakis has engaged with coaching at a grassroots level recently and says it is something he would like to pursue in the future. Although reluctant to accept the influence he has on younger players, the roving midfielder often finds himself acting as a mentor thanks to his experience.

“What I’ve done is nothing compared to many players out there.

“But I’ve been at Sutherland for six years and I’ve clocked up a few kilometres in the Premier League.

“I’m the type of senior player who is there to give advice to the younger boys.

“Whatever I can give to them I do and they listen to what myself and (Sharks captain) George Souris have to say.”

Six weeks into the 2012 season, Stavroulakis has put all future goals aside to focus on bringing the title back to Seymour Shaw.