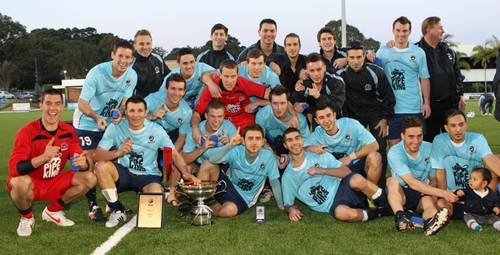 Sutherland Sharks clinched the 2012 Waratah Cup title with a phenomenal showing in the showpiece event at Cromer Park on Sunday against APIA-Leichhardt Tigers.

Played with their foot on the accelerator from the opening exchanges, the Sharks gave the Tigers very little in a dominant display that saw Robbie Stanton’s men score four goals in the 4-1 romp.

Chris Price and Matt Bailey each scored for Sutherland in the opening half – in almost identical fashion – before the Sharks added another two goals in a fine second-half showing courtesy of Blake Powell and Panni Nikas. The Tigers consolation arrived via Adel El Jamal.

Sutherland welcomed back George Souris from injury for this match, and the experienced campaigner did not disappoint with a sensational man of the match showing. Souris was organised and unyielding in defence, and his leadership on the park certainly played a huge part in the Sharks triumph.

Somewhat surprisingly, the Tigers were flat after going 0-2 down midway through the opening half, and despite the usual fine displays of Franco Parisi and Adam D’Apuzzo, the side was unable to get back into the encounter.

Sutherland created the first opening for the afternoon with Hayden Morton using his speed on the right to get to the byline. The youngster played an equally impressive cut back ball into the path of Blake Powell who, under immense pressure from his marker, failed to divert his attempt on target.

APIA-Leichhardt’s response arrived via a set-piece on 4’ minutes. Adam D’Apuzzo’s centre was partially cleared by the Sharks defenders, though Andrew Bevin’s first-time shot failed to cause Nathan Denham any concern.

The Tigers kept pressing 2’ minutes later as Adam Casey showed his pace with a powerful counter down the right. The striker played the part of the provider with a pin-point cross onto the head of Mun-Soo Gil who headed his attempt wide of goal.

The lively opening by both sides saw both sets of players looking to get forward early, and it was the team from Seymour Shaw that found the opening goal of the afternoon on 7’ minutes.

Powell’s lightning speed down the left saw the attacking midfielder beat his marker with ease before cutting the ball into the path of Chris Price who side-footed his first time effort past Anthony Costa.

In the 16’ minute, after succumbing to some fierce Sharks pressure in midfield, D’Apuzzo created an opening on the edge of the penalty-area. The talented midfielder used his strength and finesse on the ball to round his marker before driving his attempt on goal inches wide of the mark.

The Tigers continued to press with Michael Hawrysiuk and Bevin combining on the right to release the former on goal. The APIA-Leichhardt number 16 played a powerful low-driven cross into the penalty-area though the ever impressive Souris was on hand to thwart any danger.

On 21’ minutes, the Tigers squandered a glorious chance to draw level. Some fine build up play from the left by APIA saw the ball fall to Hawrysiuk. Despite claims of offside by the Sharks players, the Tigers midfielder brought the ball down though failed to hit the target from close-range.

The miss proved costly as Sutherland doubled its lead at the other end 2’ minutes later.

In almost identical fashion as the opening goal, the Sharks breached the Tigers rearguard down the left to find the back of the net. Chris Price’s delivery from the left fell into the path of Bailey, who with a leg injury and with his last involvement in the match, slotted the ball home past Costa.

Bailey’s exit from the match saw Panni Nikas thrown into the mix by Robbie Stanton, meanwhile the Tigers too were forced into making a tactical adjustment with playmaker Franco Parisi taking the place of Gyu Ree Lee.

On 34’ minutes, Nikas showed all his skill and finesse on the ball with an exquisite ball to release Powell through on goal. The speedster got to the ball first to go one-on-one with Costa, though the young shot-stopper made himself big to produce a tremendous save down to his left.

Despite the Tigers’ ambitions to get the ball forward in search of a goal to re-open the contest, it was the midfield pairing of Nick Stavroulakis and Yianni Fragogianis that had the Sharks in control of proceedings.

APIA-Leichhardt’s afternoon took a further turn for the worse on 40’ minutes when Mark Byrnes fouled Powell inside the penalty-area, leaving referee Kris Griffiths-Jones with no choice but to award a penalty.

Nikas stepped up to the spot and delivered a sublime chipped ‘Pirlo-esque’ penalty down the middle of the goal, though the goal was disallowed as a number of players entered the penalty-area.

In somewhat harsh circumstances for the playmaker, his second attempt saw the ball finish wide of goal, much to the relief of the Tigers’ players and supporters.

Despite holding a two-goal lead Sutherland continued to press for a third, and Robbie Stanton’s men very nearly found it when Fragogianis’ well-driven effort hit Costa’s right-hand post in the final minute of the half.

Following the break, Parisi very nearly re-opened the contest with a long-range drive that only just finished over Denham’s crossbar.

Sutherland’s response at the other end arrived via a Nikas set-piece delivery. The playmaker’s cross from the left had the APIA-Leichhardt defenders on the back foot, though Costa was on hand to claim the ball and release his players forward.

The experienced George Souris continued to show his colours with an impeccable start to the second-half. The Sharks captain was not only brilliant in defence though immense in starting his side’s forward forays.

Sutherland’s perseverance in the front-third paid dividends in the 56’ minute with the side’s third – and arguably, most impressive – goal of the afternoon.

Started by Stavroulakis, the midfielder played an intricate one-two with Nikas before delicately sending Powell through on goal to slot home past Costa with a fine side-footed attempt.

APIA’s reply was tame in the attacking third, as the side failed to find cohesion with their passing up front. A free-kick from the right-flank nearly found a Tigers head, though the ball finished over the crossbar.

On 68’ minutes, Casey tried his luck with a rather ambitious attempt for the Tigers. The former A-League striker lined-up his attempt nicely, though failed to get a hold on the ball with his shot finishing well wide of the intended target.

Tigers’ midfielder Mun-Soo Gil tried his best to curl an attempt around Denham from the edge of the penalty-area on 77’ minutes though the shot-stopper made an exceptional save before making way for substitute goalkeeper Simon Jaeger to take the field for the closing 11’ minutes of the match.

Sutherland added a fourth goal in tremendous style following another well-worked move. Matt Gordon’s fine ball into the path of Nikas allowed the playmaker to turn and face goal before neatly driving the ball past Costa into the back of the net.

APIA-Leichhardt went close to pulling a goal back via Parisi’s well taken free-kick. The Tigers number 10 hit it well, and the ball seemed destined for the top corner, though captain courageous George Souris once again put his body on the line to thwart the attempt.

The Tigers did find a consolation goal 3’ minutes from the end, and it arrived via Adel El Jamal. The robust central defender found himself in the Sharks penalty-area for a Tigers corner. A loose ball fell into the path of El Jamal as he was making his way back into position, and with a nice turn and equally impressive shot, El Jamal beat Jaeger

Despite the slight setback in the closing stages, the afternoon belonged to Sutherland Sharks, whose captain George Souris deservedly held the Cup up over his head following the match.

Victorious coach Robbie Stanton was ecstatic with the win, though is still aware that the objective of playing finals football still needs to be worked towards:

“Today’s performance was wonderful, that is what we have been working towards all year and I am really pleased for the boys, who all worked very hard today,” Stanton commented.

“We have insisted on keeping our football system in order, and some of our results have not been good, though on a day like today where the performance came together and we got it right, we showed just how strong of a team we can be.

“We need to keep working on our system, on our philosophy, and as we saw today, we can really turn it on.

“We didn’t have a good game last week against Manly United, and I thought we were flat and heavy. We only trained twice this week, I tried to change things up a little and give the boys a bit more extra time to recover, and today

Asked about the influence of captain courageous George Souris, Stanton expressed his admiration for his team’s leader on the field:

“George has been ready for about a week to play, and to be honest I am not surprised by how well he played. I knew he could do the job today.

“George is a player that brings so much to the other players on the field with his experience, his vocal abilities and also the confidence he gives to the others. George is the advocate of pushing our football philosophy, and he does all of this playing well at the same time,” Stanton ended.

Out of the APIA-Leichhardt Tigers change room, Franco Parisi was obviously disappointed with the final result:

“I think in any Final the first goal is critical, and their first goal came a few seconds after we missed a header at the other end and they then really managed to settle with some good organisation across the park,” explained Parisi.

“They were composed and moved the ball well, constantly wearing us out and of course, the team with less possession is going to look flatter.

“Credit to Sutherland, the first goal was critical in deciding how the game would unfold.

“I thought the first 10’ minutes were positive for us, though as the match wore on, it just seem to get further away from us.

The Tigers number 10 was somewhat surprisingly left out of the starting line-up, though Parisi was his lively self when he took to the field as the Tigers attentions now turn to reaching the top-five to play finals football in the League this season:

“When the coach needs me to play, I am ready to go. I follow his orders on the pitch, and I think he wanted to use me more as an impact player today.

“Unfortunately, the match didn’t start the way we wanted, and I guess we needed to change a number of things to chase the match.

“We still have every chance of playing in the finals, so we need to bounce back after the loss today and look to collect as many points as possible to finish as high up the ladder as we can – I am confident with the players we have that we can get a few positive results to get us going and challenge to reach the finals,” concluded Parisi.