The secrets of sports recovery 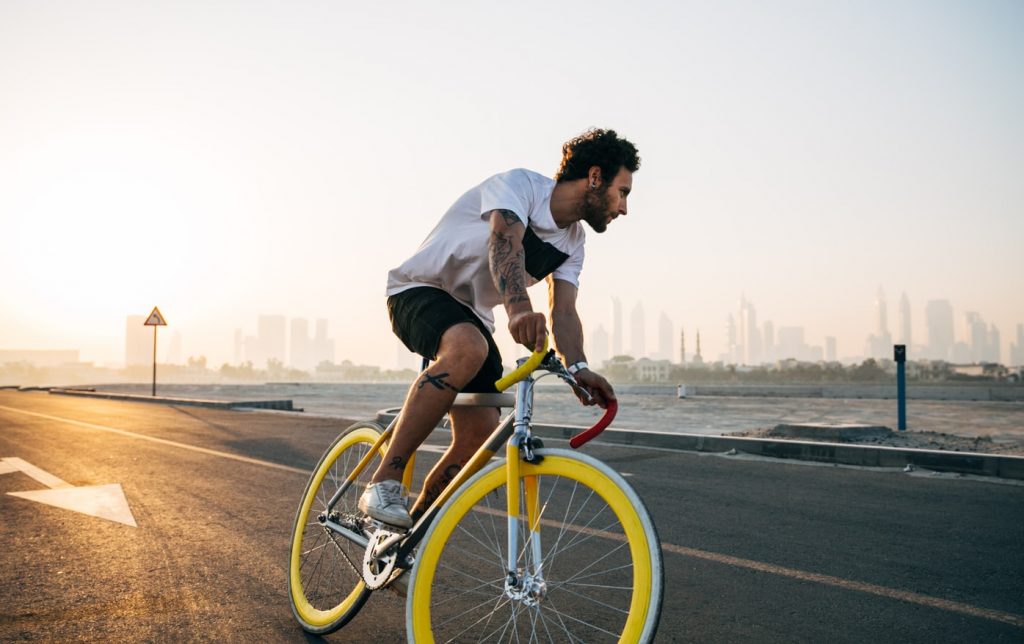 For most of the 20th century, getting fitter just involved training harder. However, today’s elite athletes, weekend warriors and even recreational gym-goers know that they have to consider not just their workouts but their bodies’ recovery from them too, especially if they want to get stronger or faster. From cryotherapy and stretching to protein shakes and compression tights, we are bombarded with suggestions on how to speed the soothing of our aches and pains. It can, however, be hard to know what works best. Sports scientists don’t have all the answers, but they can help those trying to beat their personal bests, bulk up or just stay fit to sort the restorative strategies from the recovery snake oil.

One recovery method that doesn’t require shelling out for expensive kit is stretching. Whether you’re at the gym or have just completed a marathon, everyone around you is at it, flexing their quads, hamstrings and hip-flexors. The idea is that gently extending muscles that are warm and supple after a workout will help them relax and reduce the risk of injury. Sadly, it doesn’t work. In 2011, Australian scientists carried out a Cochrane review, an analysis of previous research evidence, in which they analysed data from 12 studies. They concluded: “The evidence from randomised studies suggests that muscle-stretching, whether conducted before, after, or before and after exercise, does not produce clinically important reductions in delayed-onset muscle soreness in healthy adults.” A 2016 research review found that while stretching could improve flexibility in the long term, it reduced neither post-exercise muscle soreness nor injuries in runners.

“I gave up stretching because it doesn’t work,” says Christie Aschwanden, a science writer and former elite cross-country skier. In her new book Good to Go: How to Eat, Sleep and Rest Like a Champion, she explains how she long ago gave up trying to persuade training partners to listen to the evidence, because their belief in the benefits was so firmly entrenched.

The human body uses a combination of muscular contractions and one-way valves to shift deoxygenated blood back to the heart. Compression garments, the theory goes, put pressure on peripheral veins, drive blood into larger, deeper veins, and, as a result, increase oxygen delivery to the muscles, reduce inflammation and speed the removal of metabolic waste products.

The makers and sellers of the leggings, shorts, socks and sleeves that promise to squeeze your limbs into shape are doing well; the market is worth around $2.1bn (£1.61bn), and growing at around 5% per year. The evidence that these products improve performance, however, is thin. A 2015 study by US researchers found that male endurance runners saw no improvements in oxygen consumption and gait when they wore calf-compression sleeves.Advertisement

When it comes to recovery, the research is more positive – but mixed. Meta-analyses, from 2013 and 2017, combining the results of previous studies, found that compression garments did have small beneficial effects, including reducing muscle soreness after exercise, and speeding muscle-function recovery. “I do recommend their use in the recovery period,” says Dr Shona Halson of the Australian Catholic University in Canberra, Australia, who advises elite athletes including football and tennis players and swimmers. “There is evidence of some small positive effects, dependent on the type of garment, the fit and the compression levels.”

If you follow your team on social media, you may have come across odd images of semi-naked players in face-masks emerging from what looks like dry ice. Popular in top-level football, rugby and other sports, cryotherapy is also marketed to amateurs seeking to stay on their game.

Whole-body cryotherapy involves spending two to three minutes in a chamber of air cooled to as low as -160C (-256F). Proponents say this sends energy to muscles, reduces blood flow to extremities, reduces inflammation, and speeds recovery from soft-tissue injury. Researchers remain unconvinced. “The evidence is insufficient to support the use of whole-body cryotherapy as a means to prevent or treat muscle soreness after exercise,” says Dr Joe Costello, a senior lecturer in exercise physiology at the University of Portsmouth, who led a 2015 Cochrane review on the practice.

Athletes have long engaged in a more low-tech form of post-exercise body-cooling in cold-water baths, with true masochists such as Andy Murray adding ice. A 2011 meta-analysis found that this could reduce perceptions of muscle soreness. The jury is still out, but many sports scientists think that any physiological effects of cold air or water may be down to a Pavlovian “conditioning effect” whereby an expectation of benefits triggers the release of natural painkilling endorphins and dopamine, a neurotransmitter involved in sensations of pleasure and pain.

Exercise can increase oxygen consumption as much as 20-fold, which can cause muscle damage, muscle fatigue and inflammation. Some runners and other endurance athletes try to boost their natural defences and reduce muscle soreness with antioxidant supplements, including vitamins C and E, and polyphenols such as resveratrol, sometimes in high doses in the days before and after intense sessions. Others seek the same benefits from beetroot, cherry and pomegranate juices.

Many sports scientists now see this practice is based on an outdated view of oxygen metabolism, which fails to take account of the body’s ability to handle increased free-radical production efficiently. A Cochrane review of 50 studies of antioxidant supplementation in either pill or food form found no significant effect on muscle pain after strenuous physical activity. “Antioxidant supplementation does not appear to reduce muscle soreness after training or other exercise,” says Dr Costello, a review co-author. Some research suggests that antioxidant supplements may even delay muscle recovery and undermine the ability of muscles to adapt in response to training.

Some of the carbohydrates in our food are turned rapidly into fuel for immediate use and some are turned into glycogen to be stored in muscles and the liver for later. Our bodies also need protein to build muscle and repair tissues.

Research carried out in the 1980s suggested that consuming carbs immediately after exercise led to a higher rate of glycogen storage. Many still take protein shakes during a post-exercise “window of anabolic opportunity” of 30-45 minutes, during which they believe their bodies are better at building lean muscle mass.

There is little benefit to taking carbs straight after exercise, unless you’re planning a second heavy session later that day. Sure, if you use more fuel by, for example, running a marathon, you’ll need to put more back in, and if you are exercising for an hour or more, you may want to gulp down a few jelly babies to get some extra glucose into your bloodstream. But if you’re looking to refill your muscles’ energy stores in the form of glycogen, it makes little difference whether you do it on the finishing line or at the next meal.

In the 1970s, marathon runners were told that drinking fluids would slow them down. The growth of mass-participation runs like the New York Marathon and new research led to changed advice to drink as much as possible during intensive workouts.

The body keeps its core temperature close to 37C (98.6F) by sweating and sending blood to its peripheries. If this fails, and body temperature rises by too much, the result can be heat exhaustion, which makes people feel weak and dizzy. Left untreated, it can lead to rare but potentially fatal heat stroke.

The sports drinks industry was quick to emphasise, and sometimes exaggerate, these dangers, telling athletes to drink fluids irrespective of thirst, especially expensive ones containing sciencey-sounding “electrolytes”, AKA salts. In fact, we can easily get all the salts we need, such as sodium and potassium, from food. When our bodies lose salts in sweat during exercise, their concentration in our blood is maintained through changes to water levels. Dehydration causes only a minority of cases of heat stroke. In fact, sports scientists say, water intoxication, or hyponatremia, is a greater danger. “Our bodies are equipped with this really good monitor of when we need to hydrate,” says Aschwanden. “It’s called thirst.”

As early as 1936, the renowned endocrinologist Hans Selye noted the similarities in physiological responses in lab rats subjected to different types of stress. More recently, sports scientists have come to appreciate that if athletes are fretting about money, a bullying boss or being dumped, their physical recovery and adaptation to training can be undermined. In a 2012 study, for example, Finnish researchers found that the lower stress levels of sedentary adults, the more their physical performances improved in response to training.

Relaxation is a vital part of the recovery process, and one that is too often ignored

From yoga and meditation, to massage and flotation tanks, there are any number of ways to relax. A number of studies provide evidence that massage can increase parasympathetic nervous system activity – moving us from stressful “fight or flight” responses to those associated with more relaxed “rest and digest” functions.

Separating out physical and psychological effects is, however, hard because study subjects usually know if they are doing something relaxing. US scientists got around this by putting rabbits through simulated exercises. Those that then received 30 minutes of Swedish massage had less inflammation and improved muscle function, compared to those that did not. It is, however, unclear how applicable the findings (which were not published on 1 April) are to humans.

When athletes ask Aschwanden for advice on recovery, she suggests building relaxing rituals into their daily routines. “It could be having a hot shower, taking a nap or just sitting still with a book – it really doesn’t matter. Relaxation is a vital part of the recovery process, and one that is too often ignored.”

Exercise causes tiny tears in muscle fibres. The body responds by rebuilding muscles, only bigger and stronger so as to cope better next time around. Human growth hormone (HGH), a protein produced in the body, plays an important part in the growth and repair of tissue, including muscles. Produced in the brain’s pituitary gland, HGH is mostly released during slow wave, or deep, sleep. As humans age, we get less deep sleep, produce less HGH, and take longer to recover from exercise and injury. Release of HGH is just one of many processes that take place during sleep that affect athletic performance and aid recovery. Sleep deprivation has been shown to cause slower reaction times, increased pain sensitivity, immune system suppression, greater susceptibility to colds, impaired motor learning and reduced concentration.

Little wonder that the likes of Manchester United and Real Madrid track their players’ sleep, have installed sleep pods at their training facilities and employ the services of sleep coaches. A 2014 study of adolescent athletes aged 12 to 18 found those who slept less than eight hours per night were on average 1.7 times more likely to have been injured during a 21-month period than those sleeping eight hours or more.

“The most powerful recovery tool known to science is sleep,” says Aschwanden. “It may sound boring, and few people get it right, but if athletes truly prioritise sleep they can see amazing benefits.”

Information from: The Guardian